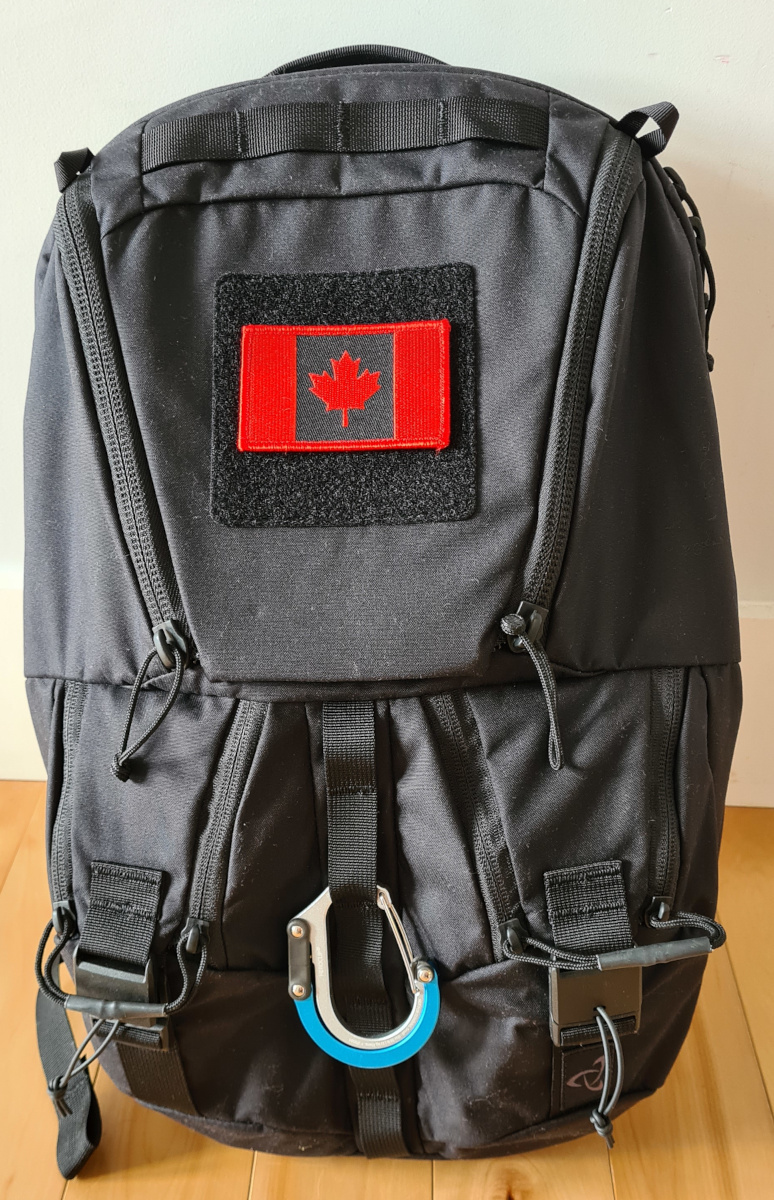 I’ve been hunting for the “perfect” backpack lately. For me, that’s a bag which is:

Mystery Ranch caught my eye, not so much their military tactical stuff but their more toned down everyday carry bags. Specifically I narrowed it down to either their Urban Assault 24 (yes, the name makes me cringe too), or the Rip Ruck 24. The UA 24 (that sounds a lot better) still looks really appealing, very understated and a lot of space in a big bucket. I might give one a try someday but I ended up going for the Rip Ruck this time around.

I like the aesthetic of the bag a lot. It consists of two small front quick access pockets, and two larger main compartments, one of which can be easily ripped open, and the other with a great laptop compartment. there’s also handy velcro around the Mystery Ranch logo on the front where you can slap a patch, which is nice because mine is full black and in need of a little color. 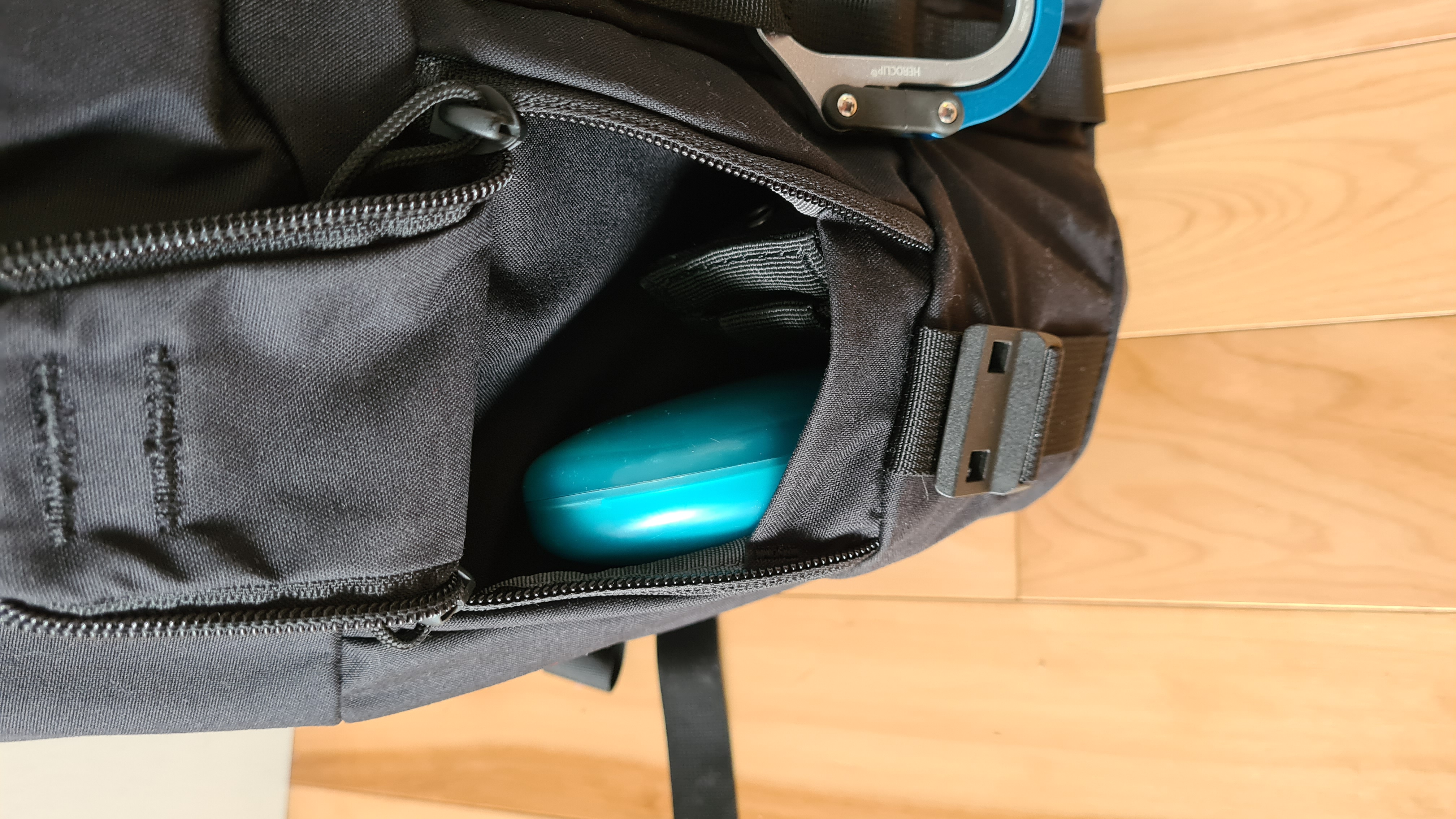 The small front pockets are surprisingly deep, they can actually be a bit cumbersome for finding small items and are better suited for tall things. Both are secured by pretty strong magnets when not zipped, pulling straight up they usually won’t even open, you need to pull out and away from the bag. Probably wouldn’t be a good idea to keep anything super valuable in there if you’re using it in an urban environment where pickpockets are a thing, though that is definitely not part of my day to day life. 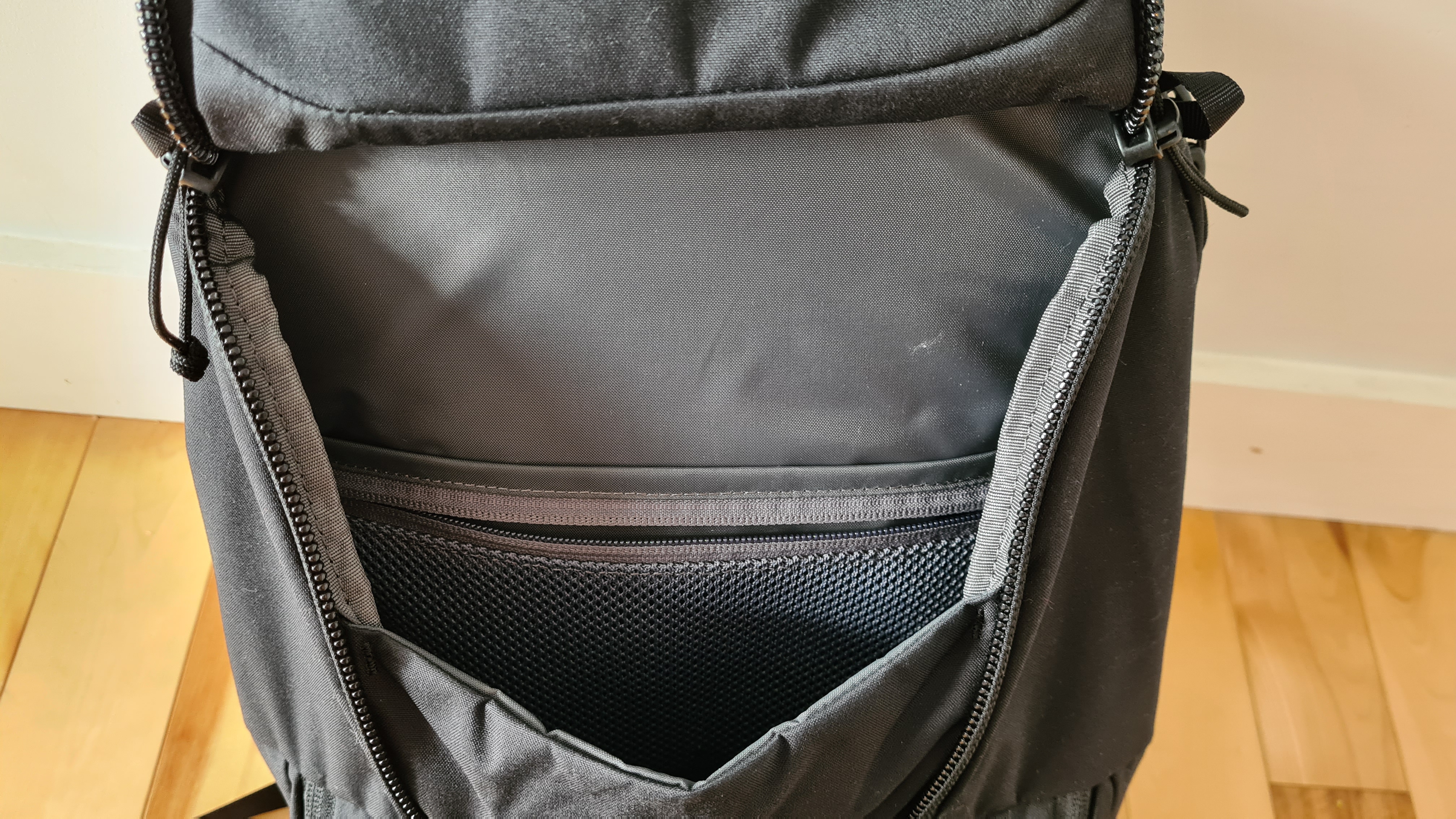 The first main compartment has flap you can very satisfyingly rip open and must be the reason for the bag’s name. When not zipped it is also secured by magnets. In here you’ll find two slip organization pockets, one open and one zipped with mesh. I actually do not love either of these and find there’s a distinct lack of organization in here for smaller things. (the UA 24 is probably better in this regard) The back pocket is insanely deep, right to the bottom of the bag, it’d be great for documents or magazines but there’s plenty room for that in the back compartment, so I really don’t get this. Anything else gets lost in there. The zipped mech pocket is actually split in two a little way down, this one is ok but doesn’t make up for the overall lack of ways to organize small things. You end up just dumping things into the bottom of this overall compartment and having to fish for it, it’s a little tricky to see in there as well given the size of the opening. The bag also doesn’t have an external water bottle holder, so mine ends up in here as well, which works ok as it’s so quick to get into. 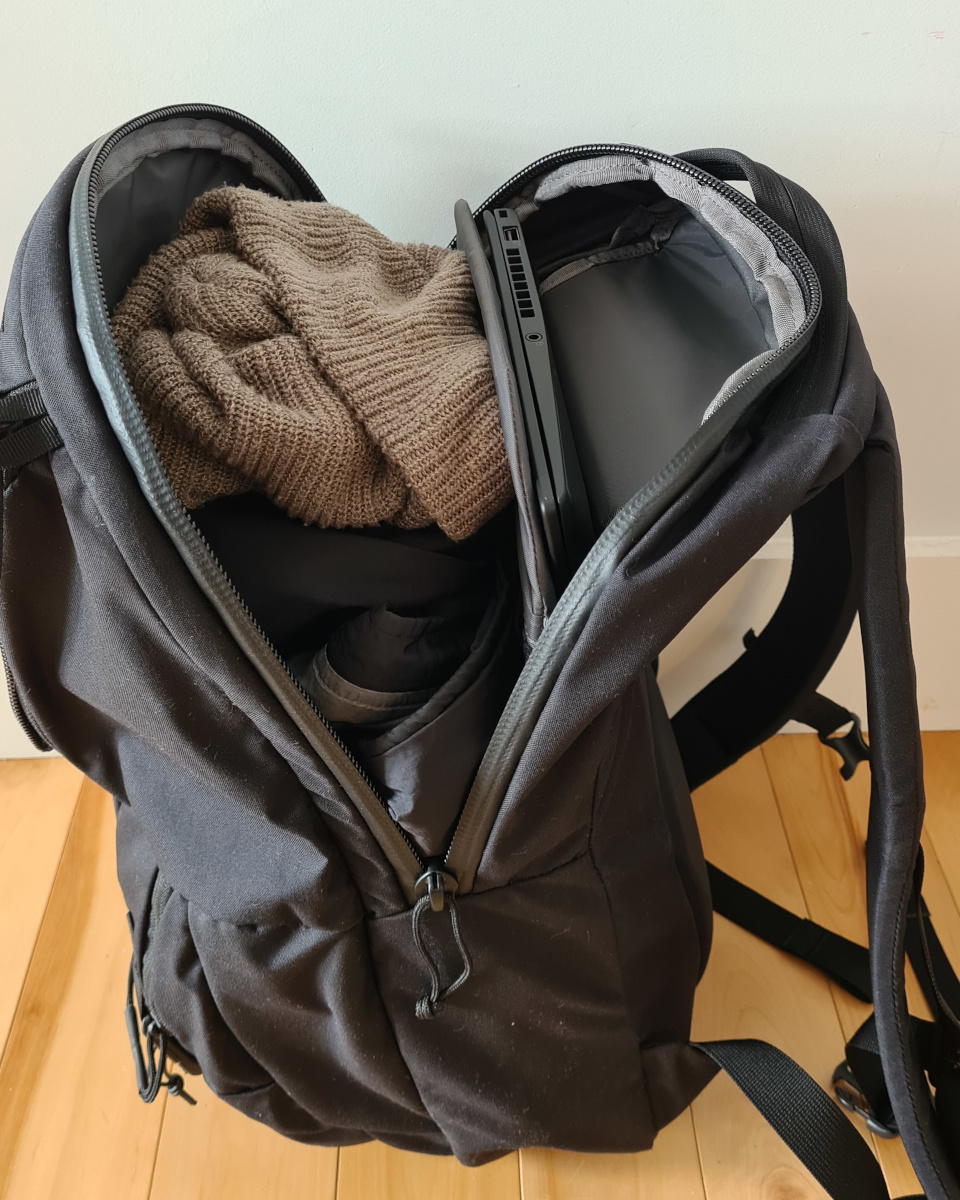 The rear compartment has a nice padded laptop sleve with a false bottom, definitely feels like a safe place to cart a laptop around and fits my 15" Thinkpad great. The top of the back of the bag also has a couple really nice foldable areas which make the bag just roll back to let you get the laptop in and out. Also helps with the fit as mentioned below. There’s also another somewhat padded tablet sleve, a couple other document pockets, and then just the bulk of the space in the bag where I’m usually carrying clothing or similar. This main compartment is protected by a nice weatherproof zipper. 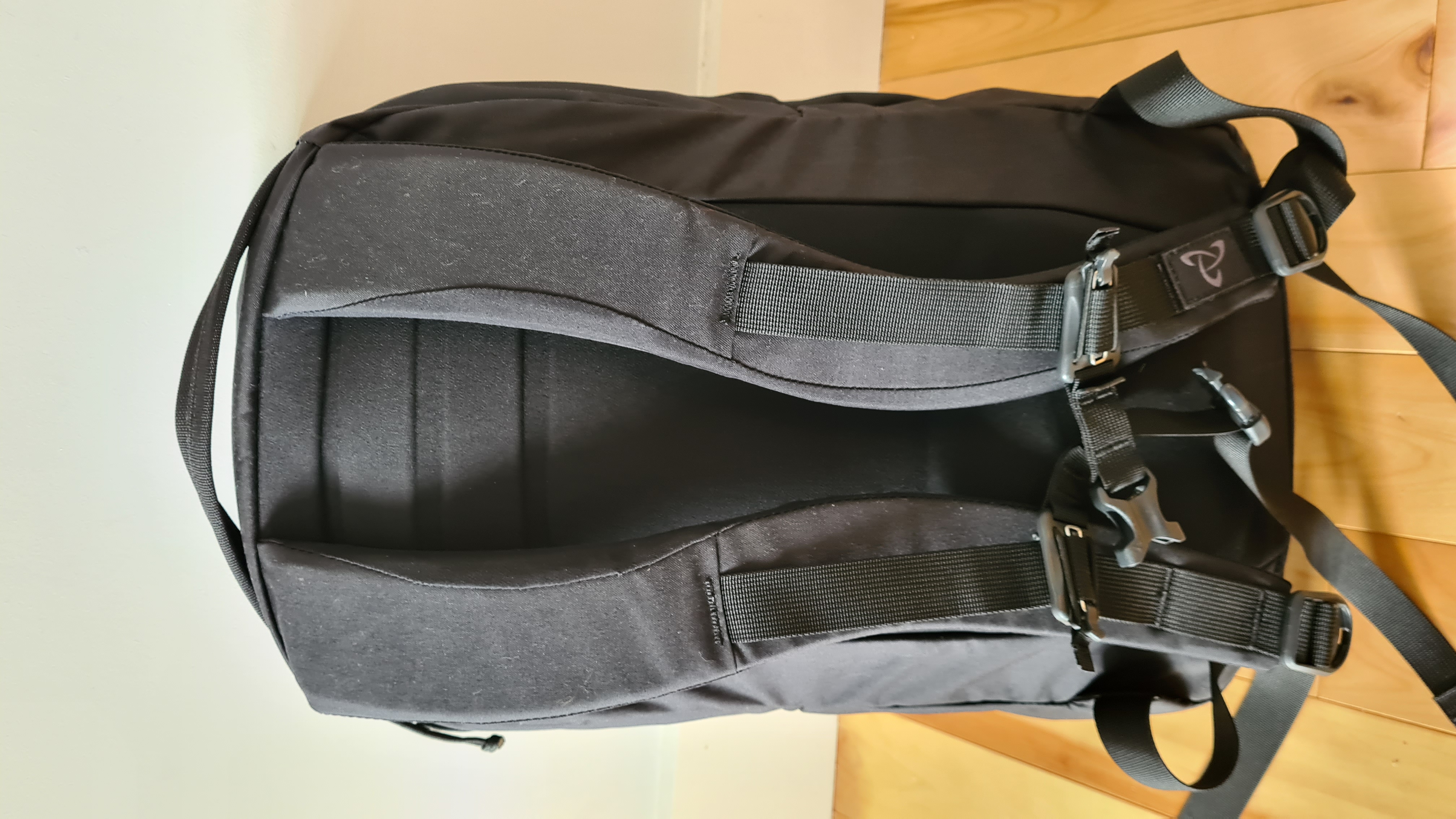 I find the bag very comfortable, often forget that I have it on if wearing a jacket or sweater which says a lot to me. Straps are thick and well padded but also not rigid. It’s worth noting that there is some extra padding for lumbar support, something I’ve never seen on a bag before. It feels a little strange at first but I’ve come to appreciate it, it does seem to make things more comfortable if you keep the bag at the correct height for your body. I find this thing tends to ride a little high but if I loosen the arms a bit it drops to a good location for my back. One exception here, on a bike where your back is arched, the lumbar support actually doesn’t feel stellar and makes it less stable than it would be otherwise. I still use it when doing occasional rides and it’s fine, but wouldn’t recommend if you’re looking to use it on a bike often.

I love the look of the bag both on and off. It has a very slim profile and contours nicely to the back, in part because of that flexible material at the top of the bag’s laptop compartment which just curves over your upper back.

Quality is hard to comment on after just a few weeks but it seems fantastic, has a great warranty, and I don’t have any concerns.

Overall very happy with it, a little more organization would be nice, but it hits all my goals nicely. I do hope to try a UA 24 to compare someday.

After a few months of use, I decided it was time to try another bag. I love the way the Rip Ruck looks, it’s super comfortable, but the layout is not quite right for me and I think there are better options I’d like to try. I like a little organization, those front little pockets are too deep and difficult to get things in and out of. The larger front compartment is way too light for organization and really just well suited for documents and maybe a couple flat things. I have to store my water in here due to lack of external holder. The rear compartment is pretty good but I dislike having the bulk of the bag almost split down the middle. I spend a lot of time outdoors hiking and at the beach, and this split makes it hard to carry things like extra layers, towels, etc.

I ended up selling it on eBay (and meeting a fellow backpack nerd in the process), and ordering a Mystery Ranch UA24 next. It hasn’t arrived yet but I’m looking forward to it and will probably write up some thoughts here in a separate post someday.